Conti debuted with the WWE in 2016, but was ultimately a victim of budget cuts during the pandemic. AEW wisely scooped up the talented Conti. In AEW, she has had Women's title matches as well as an NWA Women's title match. At only 26, Conti has a bright future.

At the inaugural Squared Circle Expo last May, Conti was one of the most popular wrestling guests. Aside from her talent and beauty, Conti's popularity at the SCX was in part because this was one of the first appearances she has made (possibly the first major one). Everyone wanted to get a picture or autograph from the rising star.

One of those fans was my pal John Dean. A big wrestling fan and an all around great guy, Dean knows wrestling talent. Of course, he had to meet Conti.

For more information on the SCX go to SquaredCircleX.com. Their next event is April 15-16, 2022. I will be there and I am pretty sure John will, too. Also check AllEliteWrestling.com for more info on Conti. Hopefully, she will return for SCX II and bring many of her AEW mates with her. 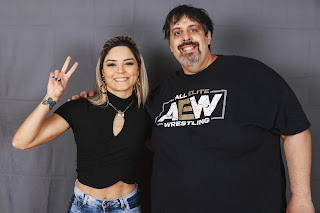