One of the recent guest announcements included Dylan Postl, better known as Hornswoggle or Swoggle from the WWE. Standing at 4'5", Postl has made a pretty big impact in wrestling.

After debuting in 2006, Postl was involved in many storylines, including the Anonymous GM bit and the Vince McMahon son saga. Along the way, he also won the Cruiserweight title once and was the winner of the 2008 Mini Royal Rumble.

In 2019, Postl released Life Is Short and So Am I: My Life Inside, Outside and Under the Wrestling Ring. The book is a look at his work in pro wrestling, but also his life before the WWE. Postl has overcoe a lot to get where he is and his story is fascinating.

I have met Postl a few times, most recently at Great Lakes Championship Wrestling's Blizzard Brawl, and he is always a good time. I am really looking forward to seeing him again at SCX II.

As my aforementioned article reveals, Postl is just one of many qrestler guests in a jam-packed lineup. SCX II is going to be a blast, probably even better than last year's debut, if that is possible.

Go to SquaredCircleX.com for more info and updates. Also, check back here for my recurring coverage. 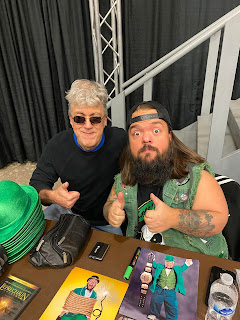