On the Beat With Kenna Wilkey

Kenna Wilkey was a star player on the Northwestern Wildcats softball team. After three seasons (plus a COVID non-season), Kenna is taking her talents to the University of Houston.

A Chicago area native, Kenna was a two-sport athlete in high school. In basketball, she scored 1,000 points in just three seasons. On the softball diamond, Kenna was a dual threat on the mound and at the plate.

I was sad when I saw Kenna's announcement about transferring to Houston. In addition to being a great player, she is a class act. It was always fun seeing her play or just catching up a bit post-game.

I reached out to Kenna about an interview and she graciously responded positively. On Wednesday, after practice, Kenna jumped on a Zoom session with me.

We talked about her memories at Northwestern, her reasons for going to Houston, her thoughts on Athletes Unlimited softball, her future and more. While I have known Kenna for four years, this was the first in depth conversation we have had. As impressed as I was with Kenna before, I came away even more impressed after talking to her.

Kenna talked openly about her decision to leave Northwestern and Chicago. It wasn't an easy decision, but her reasons and approach show a level of maturity beyond her years. She also showed great courage. It would have been the easy thing to do to stay at Northwestern and finish her career with the Wildcats, but Kenna wanted something different for herself and she made the tough choice.

With two years of eligibility left, Kenna's immediate future is on the field, but we talked about where she goes in the future. She has experience coaching and I see that in her future, but she also has a passion for working with special needs children. When Kenna talks about her work with those children, you can feel her dedication. Whatever she does though, Kenna will be a success and others will benefit.

Obviously, the Cougars do not play anywhere near Chicago, meaning I will not see Kenna pitch in person. I will be following the Cougars online however. I'll be cheering for #33 from afar. I'll also catch up with Kenna later in the season, as she has agreed to come back on with me for updates.

I really appreciate Kenna's time. Even more important, I appreciate all Kenna did at Northwestern. It was truly a pleasure watching her progress over the years. She is a special player and a special person. We'll miss Kenna in Chicago, but Houston has gained a bunch of new fans. Good luck, Kenna, and thank you.

The interview is at On the Beat With Kenna Wilkey. Go to UHCougars.com for more info on Kenna and the team. 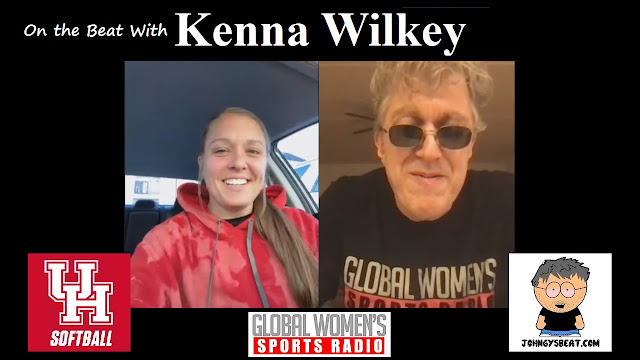