Celebrity Jersey Cards is a weekly series in which I create virtual trading cards for celebrities wearing jerseys. Today, I am featuring two huge wrestling stars appearing at Squared Circle Expo II in Indianapolis April 15-16. I can't wait to be there, but until then, I will settle for these new creations.
Mickie James has done it all in wrestling. She's a multi-time champ in the WWE and Impact Wrestling. Currently wrestling in the NWA, James recently made an appearance at WWE's Royal Rumble. She is also an accomplished singer. James threw out a first pitch at a Chicago Cubs game to earn her Celebrity Jersey Card. I have met James a couple times years ago and I really look forward to seeing her again at SCX II. 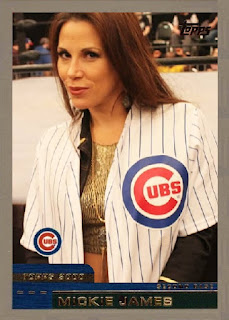 Second generation wrestler Jeff Jarrett is another veteran who has done it all in wrestling. He formed Total Nonstop Action Wrestling with his father. Out of Impact Wrestling, Jarrett returned to the WWE for several appearances. Jarrett's Celebrity Jersey Card features Gnash, the mascot of the Nashville Predators. Somehow despite meeting hundreds of wrestlers, I have never met Double J and I am really excited to meet this legend. 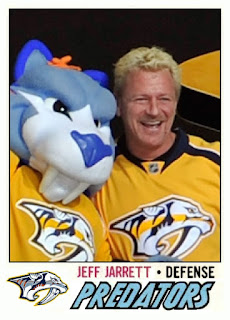