On the Beat With Ashley VanBoxmeer of Softball KC

While growing up in California, Ashley played softball with traveling teams. As a high school junior, she tore her ACL, one of several injuries Ashley would overcome during her playing career. She started her college career as a shortstop at the University of New Mexico. After one year, she transferred to Cal State Fullerton. Among her many awards and accolades, she was named the 2006 Player of the Year. She also played five years with Team Canada.

In 2017, Ashley opened Softball KC in North Kansas City, Missouri. Ashley's vision was to provide a place just for young women, something she felt was missing on the softball scene. Softball KC was built to be a "one stop shop" for young women softball players. It is run by women for women.

Ashley's coaching philosophy is to be "demanding, but not demeaning." On the Softball KC website it states, "Hustle, train hard, and give us your all, week after week, and I guarantee your game will improve." It also states, "Hustle. Compete. Win." Those aren't just cool catchphrases.

It's clear Softball KC can bring out the best in players of all levels, if they are serious and give effort. It's also clear Ashley wants to make every player better. Her commitment to the players was easy to see. Her mindset can be traced back to her youth, growing up with a father who starred in the National Hockey League.

John VanBoxmeer played 11 seasons with the Montreal Canadiens, Colorado Rockies, Buffalo Sabres and Quebec Nordiques, winning a Stanley Cup with the Canadiens in 1976. Papa John instilled in Ashley the drive to excel, a trait she took to heart as a player, coach and business owner.

In our interview, I related my story of meeting the elder VanBoxmeer, while I was covering the Rockford IceHogs of the American Hockey League. Taking my seat in the Rockford press box, I found myself sitting next to John, who was scouting at the time. The young hockey fan came out in me as I realized who he was, but I remained calm and enjoyed talking hockey with him throughout the game. I did muster the courage to ask for a photo before we left. I couldn't pass that opportunity. It remains one of my biggest highlights during my time "On the Beat" with the IceHogs.

I talked to Ashley about all of this in our interview. Ashley discussed coming back from injuries, her coaching style, her father, her career highlights and much more. Ever humble, when talking about Team Canada then and now, Ashley mentioned great players like Danielle Lawrie and Hayward, but Ashley is right there with them. Ashley is more interested in her students than her many accolades.

When discussing Athletes Unlimited, Ashley's thoughts went right to growing the game. AU provides opportunities to softball players. She is all about growing the game and paying it forward with the youth of today.

I had a great time talking softball with Ashley. Of course she wants to be a successful business owner, but it seems it's equally (if not more important) for her to grow the game. Ashley is proving you can do both successfully!

I thank Ashley for her time and consideration. I encourage all to go to SoftballKC.com for more info on Ashley's training facility. 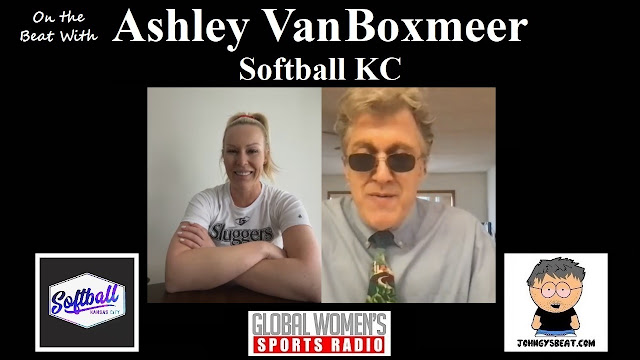