Celebrity Jersey Cards is a weekly series in which I create virtual trading cards for celebrities wearing sports jerseys. Today, I continue the season-long alphabetical journey through all Major League Baseball teams.

Reginal Kenneth Dwight rose to Hall of Fame status as Elton John. Now theoretically on a Retirement Tour, John has been performing for more than 50 years. John earned his Celebrity Jersey Card by performing the National Anthem for the Houston Astros. Naturally, he wore the colorful rainbow jersey, too. Would you expect anything less from the man who oozes flair? 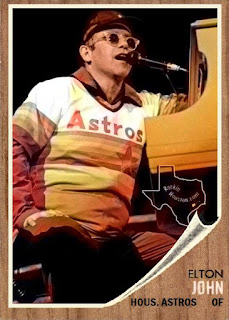 Although not as accomplished as Elton John, Jack Ingram has had an outstanding musical career, too. From The Woodlands near Houston Texas, Ingram has had seven top forty singles on the country charts. At the Academy of Country Music event, he was awarded Top New Male Vocalist and Song of the Year (with Miranda Lambert and Jon Randall), among other accolades. Ingram performed the National Anthem for the Astros to get his Celebrity Jersey Card. 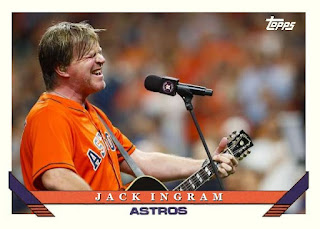