On the Beat With Chris Bournea

I was joined by Global Women's Sports Radio Contributor Tommy Else for an interview with film maker Chris Bournea to discuss “Lady Wrestler: The Amazing, Untold Story of African American Women in the Ring.” The documentary details the fascinating stories of African American women wrestlers in the 1950s, '60s and '70s.

Produced, directed and narrated by Chris, “Lady Wrestlers” tells the stories of African American women such as Babs Wingo, Marva Scott, Ethel Johnson, Ramona Isbell and many others who dealt with sexism, racism and other obstacles while carving out lives inside the wrestling ring. Not only did these women battle for their place in the male-dominated world of pro wrestling, many did it while raising a family, making their journeys even more impressive.

“Lady Wrestler” makes an impact in several fields. Their stories are part of wrestling history often untold and forgotten. On a larger scale, they are a part of African American history. Theirs are stories of equality of the sexes and races.

These women are trailblazers and pioneers. They paved the way for future wrestling stars from Jacqueline and Dark Journey to Sasha Banks and Bianca Belair. Their impact isn't just on the African American wrestlers though. Their dedication kept women's wrestling alive and made it that much easier for all women who followed.

Chris talked about the origins of “Lady Wrestler,” reactions from the ladies involved and the wrestling community, the adversity the women had to endure, future projects and more. Tommy and I hadn't seen “Lady Wrestler” yet,  but the good news is Chris has agreed to return for an update and to answer our questions after we watch it, which will happen very soon.

Wrestling wasn't always the glitz and glamour it is now. These women had a big role in the progression of women's wrestling and we greatly appreciate Chris discussing “Lady Wrestler” with us.

The interview is at On the Beat With Chris Bornea. For more info on Chris and this documentary, go to LadyWrestlerMovie.com and ChrisBournea.com. Check back here for our update interview with Chris coming soon. 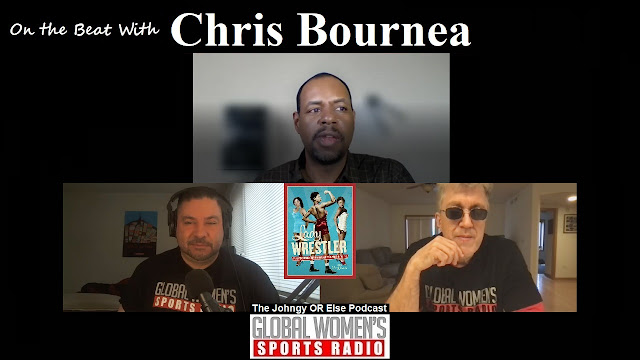