On the Beat With Odessa Jenkins

While most Chicagoans are thinking about baseball today, my mind was on football, specifically women's football. That's because I had the pleasure of talking football with Odessa Jenkins, CEO of the Women's National Football Conference for an interview on Global Women's Sports Radio.

The WNFC, a women's tackle football league, debuted in 2019. Quickly becoming one of the fastest-growing brands in the country, the WNFC has been featured on many major sports outlets and currently is televised on the Vyre Network.

Odessa talked to me about the start of WNFC, milestones, sponsorships, goals and more. She was even a great sport when I “complained” there is no Chicago team, but I loved her response. As much as I would love a team in my hometown, I would rather be patient and wait for a well-backed team that will succeed and stay here.

My biggest takeaways from the interview are her passion and mindset. Clearly any CEO wants their organization to be profitable,  but I think Odessa sees that as part of the puzzle and not the whole objective. If you have passion to build a solid foundation, the profit will follow.

As for her mindset, I see a lot of companies in all sports start with a lot of fanfare, only to fade away quietly. It would be easy to start teams everywhere, especially in Chicago. Delaying that start until the right situation develops is the best way to build the team and the league.

The 2022 season started last weekend and runs eight weeks through May 21. Each of the 17 teams plays a six game schedule over those eight weeks. The Conference Playoff Tournaments run 6/9-6/11, with the IX Cup Championship Weekend on 6/24-26.

Jenkins closed by saying an announcement is coming in the future. While she did not give me any scoops on it, she did promise to return to GWSR with the story once it is announced.

For more info on the WNFC, go to WNFCFootball.com and follow the league on social media. Also, check back here for our updates. Our interview is at On the Beat With Odessa Jenkins.

Thank you to Odessa for her time and consideration. We'll be looking forward to future conversations. 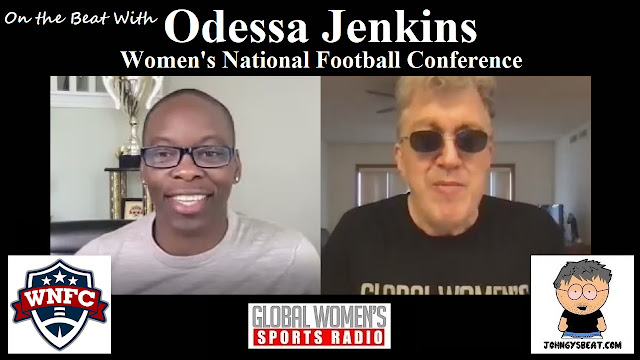