I met Sarah Logan about eight years ago at Resistance Pro Wrestling. Then, she was known as Crazy Mary Dobson. She eventually became RPro Women's champ.

Sarah was great in the ring, in the locker room, with the fans and with the crew. You could tell she had a bright future in wrestling. She was young and talented beyond her years.

Soon the WWE came calling. Sarah left RPro as the champ and jumped to the big stage of the WWE. We were all so proud and happy for her.

Her promising start and path in the WWE was derailed during the pandemic, when the WWE released her. We all assumed it was a temporary thing and she would be back.

While away, Sarah went on to other endeavors. She started an internet video series with her husband Erik, who is still with the WWE. They had a baby and seem to be living a happy life. Sarah returned to the WWE for the Women's Royal Rumble earlier this year, but that was a one time thing, at least so far.

As much as her fans would love to see Sarah return, we all support her decision and applaud her happiness. It's great seeing a young woman knowing what she wants and living her life as she wants.

I was so excited when I saw Sarah announced for the Squared Circle Expo II. I really look forward to seeing Sarah again.

This list has a little of everything. There are Hall of Famers and current stars. All major companies are represented, as well as some great indy stars.

A convention for the wrestling fans, run by dedicated folks, SCX was the best convention debut I have attended and SCX II promises to top it. SCX II is a two day convention running April 15-16 at the Wyndham Indianapolis West. There will be photo ops, meet-and-greets, panels, Q&As, vendors and more, including a full wrestling card on Saturday night.

Tickets are still available at SquaredCircleX.com. I will be "On the Beat" there all weekend. I can't wait to meet the wrestling stars, reconnect with friends, watch some interesting matches and buy cool stuff. I hope to see you there. 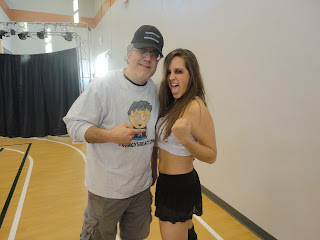