A couple weeks ago, my buddy Tony Feddeler and I traveled from the Chicago area to Indianapolis, Indiana for the Squared Circle Expo II. Like many others, we were looking forward to this ever since attending the debut of SCX last year. Tony and I agreed, SCX II was even better, as hard as that is to believe.

The promoters of SCX assembled a wrestler lineup of more than 65 wrestling legends and stars. There were wrestlers from the major feds, indy companies and retired Hall of Famers. My only fear was I wouldn't be able to meet all I wanted, but thanks to great communication from the SCX promoters, I was able to plan things properly to meet all.

We had so many great little moments. Velvet Sky recognized me and called my name. Brooke Hogan called Tony and me her bodyguards. I caught up with Sarah Logan, a friend from our days at Resistance Pro Wrestling years ago. We appreciated Chelsea Green's selfie-taking skills.

It seemed like we had special moments with virtually every one. I attribute that to the promoters. I felt last year's wrestler lineup was the most fan-friendly convention lineup I have seen. This year's lineup was even bigger and just as engaging. That's not by accident. That is the promoters knowing who to bring.

The convention ended with a big 10 match wrestling card Saturday night. I expected a solid night of wrestling. I got possibly the best total night I have ever witnessed. Tony agreed, possibly even more favorably. The matches had a little bit of everything, from brawling to technical maneuvers. I won't print the spoiler, but the main event was amazing right up to the aftermath. Two unexpected highlights of the night included promoter Adolfo hitting a textbook spear and promoter Hardcore Heather Owens getting involved as a ref. Of course, promoter Ed was perfect as the heel manager of SCX champ Jake Omen. Other promoter Carrie, did not get involved in the wrestling, but she was a blur of activity all weekend as usual.

For the negative folks, it's usually easy to pick apart a convention to find some flaws. I dare anyone to find a legit weakness in SCX. Long lines? That proves the popularity of guests. Try buying a VIP pass. High Prices? Try again. The prices were reasonable, even lower than most signings. There's no room for negativity. This convention rocked on every level.

Again, I always make the declaration I do not work for SCX. I cover it and promote it because it is the best wrestling convention I have ever attended. I want SCX to succeed and I want everyone to know about it. I have included several pictures, but more can be found in my daily reports on WrestlingFigs.com.

I thank the promoters (Adolfo, Carrie, Ed and Heather) for organizing and running a fantastic event. I thank all the wrestlers there. Last, I thank my buddy Tony for helping me and taking so many pictures.

Along those lines, this just in, SCX returns next April 7-8. I've already marked my calendar. Stay tuned here for updates as they are announced. 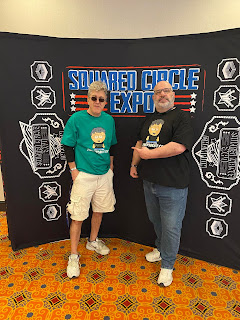