Celebrity Jersey Cards is a weekly series featuring Celebrities wearing sports jerseys.
A native of Cleveland, Ohio, Casey Coleman was a radio personality in Cleveland for nearly three decades. Holding various roles in Cleveland Browns broadcasts over the years, the team named their indoor practice facility after him. Unfortunately, Coleman died in 2006, but his legacy lives on. He earned his Celebrity Jersey Card by throwing out a ceremonial pitch for the Indians.

Born in Shaker Heights, Ohio, sportscaster Chris Rose has worked for several networks in different roles and shows over his illustrious career. Although it is unconfirmed Rose states his foot appears in the "Garfield" movie. That's cool, but not as cool as him getting a Celebrity Jersey Card for his ceremonial pitch. 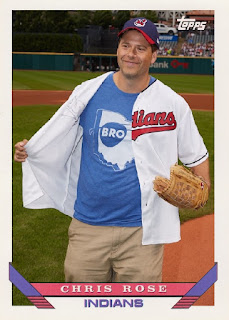