Celebrity Jersey Cards is a weekly series in which I create virtual trading cards for celebrities wearing sports jerseys. Today, we look at the WNBA.

Jewell Loyd grew up in Lincolnwood, IL, near my now. She starred at Notre Dame, before being the first selection overall by the Seattle Storm in the 2015 WNBA Draft. She went on to earn Rookie of the Year honors and is carving out an excellent career. She switched to a Mariners jersey to toss a first pitch and earn a Celebrity Jersey Card. 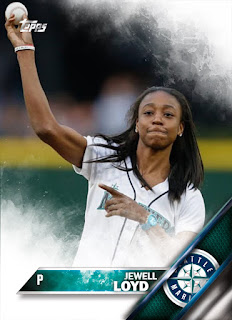 Also a first overall draft pick, native Californian Kelsey Plum starred at Washington before being selected by the San Antonio Stars (now Las Vegas Aces) in the 2017 WNBA Draft. Previously mainly a starter, Plum came off the bench in 2021 to earn Sixth Woman of the Year honors. Plum tossed a pitch for the Mariners and got a Celebrity Jersey Card for her efforts. 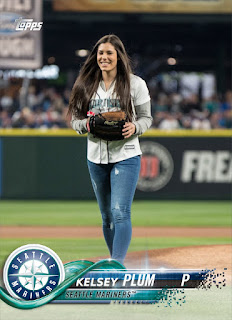