At C2E2 2021, I finally had a chance to talk to artist Enerjax, but the usual chaos of the convention did not allow me to interview her. Fortunately, in the Zoom age, I was able to finally get that introductory interview. That interview can be found at On the Beat With Enerjax.

Enerjax got her moniker by combining energy with Jackie, her given name. Not only is that a cool name, it accurately describes her. She has a lot of energy and it is expressed in her beautiful art work.

Despite being Chicago-based, I somehow never interviewed her. One good thing that has come out of this pandemic is the possibility of Zoom interviews. Zoom has opened up a lot fo posibilities. No instead of waiting another year for C2E2 to try to get that elusive interview with Enerjax, I was able to get it right from home. I still hope to get another update one from her at C2E2 2022.

This year, C2E2 2022 runs August 5-7. It's earlier than last year's December event, but still later than its usual February/March slot. Maybe they are trying to slowly get it back there. As long as there is a C2E2, the time of year doesn't matter to me. I'll be there and hopefully so will Enerjax!

Follow Enerjax on Facebook and Instagram to get all her updates, see her art and get all of her links. Check C2E2.com for all info on C2E2 2022. 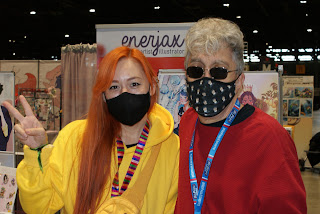