On the Beat With Carly Alvers

Yesterday, I had the pleasure of interviewing Carly Alvers, who recently finished her first season playing softball for DePaul University. As she heads into her second season for DePaul, Carly talked about everything from her path to DePaul to the upcoming Fall Ball games. That interview is at On the Beat With Carly Alvers.

A native of Mokena, Carly starred at Lincoln Way Central. A four-year letter winner at LWC, Carly's honors include:

With Carly as a key player, LWC went 88-10 during her time. Carly also earned a place on the Honor Roll each year.

In her first season, Carly played in 26 games, starting 18. She hit .293, with 2 HRs, 15 RBIs and 17 runs scored. DePaul went 29-24, but 16-8 in BIG EAST Conference play. They finished in fourth place in the BIG EAST, only a half game behind Villanova for third and one game behind Butler in second.

We started by discussing Carly's start in softball. I was surprised to learn college recruitment started way back in seventh grade for Carly. She talked about the recruitment rules changing, but eventually committing to DePaul.

Carly discussed her DePaul debut, playing at Cacciatore Stadium, the DePaul coaches, her big game, campus life and more. I put her on the spot by asking her to choose a defensive gem or a home run. She even was a good sport in indulging my important question of thin crust, deep dish or stuffed pizza.

Coming off an excellent first season, Carly is poised for an outstanding career at DePaul. I am sure she will have a lot of success and enjoyment along the way. I'll be at beautiful Cacciatore Stadium covering Carly and the team.

I very much appreciate Carly for her time and consideration. I wish her a lot of luck and look forward to seeing her and the Blue Demons in action for Fall Ball.

For more info on DePaul sports, go to DePaulBlueDemons.com. Check back here for my recurring coverage of DePaul. 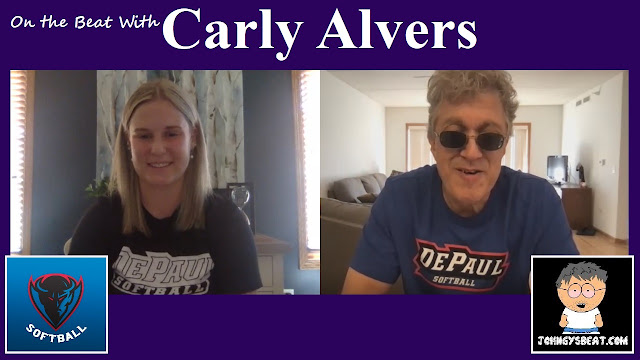