On the Beat With James Azrael

Flashback Weekend is two months away. That's only two months until Chicago's largest and longest running Horror Convention returns. Mike and Mia Kerz started Flashback Weekend in 2002 and have made it a huge event, without losing the intimate feel. Held at the Hyatt Regency O'Hare Chicago August 5-7 at 9300 West Bryn Mawr Avenue in Rosemont, this year's Flashback Weekend looks to be the best eve

In the world of horror icons, it doesn't get any bigger than Robert Englund. The man is a legitimate legend. If Englund was the only celebrity guest, it would be enough, but the rest of the list is lengthy and impressive.

There will also be many vendors and exhibitors, one of my favorites being my friend James. I interviewed James about his work with the Horror and SciFi Prop Preservation Association (HSPPA), Spooky's Swirls, The Lobo Fragmendium and more, while also talking about Flashback Weekend. As usual, James will be at Flashback and you never know what he might bring with him, but it will definitely be cool.

The many other vendors will be promoting and selling awesome stuff. Authors, artists and creators of all kinds display their creations.

There are many fun events, including panels, Q&A's, costume contests and much more. It is a weekend chock full of horror fun!

I love Flashback Weekend. I will be “On the Beat” as usual and can't wait. Until then, I will provide more looks at special guests of Flashback Weekend, as well as updates on the guest list and events. Stay tuned here and I hope to see you there.

Go to HSPPA.com for more info on James and his work. Check FlashbackWeekend.com for info and scheduling. 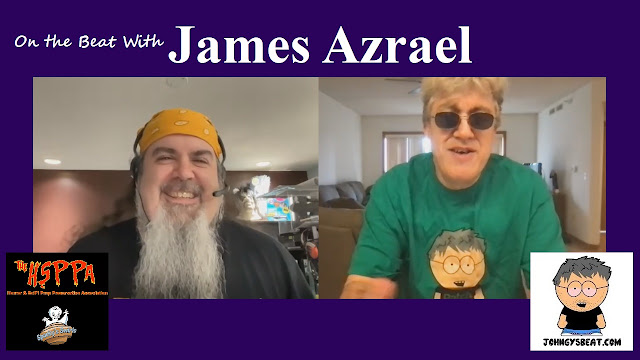