Last week, Tony and I attended 2econd Wrestling's Walk This Way in Highwood, Illinois. It was our second time at 2econd and it was even better than the first, which was great.

I wrote a full recap for Every Day Fan Sports at 2econd Wrestling's Walk This Way.

Billie Starkz is the 2econd Champ. She earned that title by winning a tournament, including winning two matches at Flood Zone, their last show in the Chicago area. Tommy Else and I interviewed Billie at On the Beat With Billie Starkz for The Johngy Or Else Podcast.

In the wrestling world full of hyperbole, Billie is a legit star on the rise. At only 17, she has been wrestling for more than four years already. It is really only a matter of time before a big company signs her shortly after she turns 18.

Billie is extremely talented in the ring and she is focused, smart and a real sweetheart outside of the ring. She is great with fans. Perhaps the best part is she looks like she is really enjoying herself. Even during matches, when she is concentrating on the action, she has a look of joy in her eyes.

Billie is something special and should go far in this business. Likewise 2econd Wrestling is off to a great start. I look forward to both continuing to get better. Be sure to follow both on social media, as well as checking back here for more coverage of both. 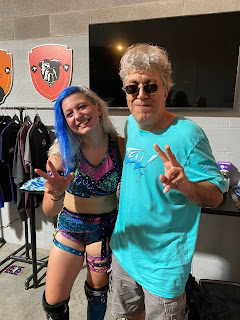