Celebrity Jersey Cards is a weekly series in which I create virtual trading cards for celebrities wearing sports jerseys. Today my season long march through all MLB teams takes us to the New York Mets and a couple Olympians.
L:aurie Hernandez was born in New Jersey and gained fame as a gymnast. She was a member of the U.S. Gymnastics Team the "Final Fie" at the 2016 Summer Olympics. The U.S. won gold in the team event. She later appeared on Dancing With the Stars, but I won't hold that against her. She posed with a bat at CitiField to earn her Celebrity Jersey Card. Despite the bat, she did actually throw a ceremonial pitch. 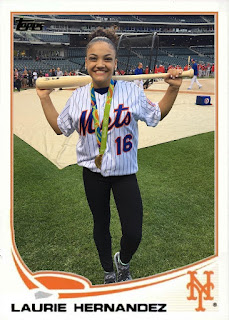 Born in Minnesota, Bethanie Mattek went on to a great tennis career. Among other accomplishments, she won nine Grand Slam titles and an Olympic gold medal. At her peak, she was ranked No. 30 in the world. She is noted for her unique fashion style, which is evident on her Celebrity Jersey Card. Her lower wear has to be the funkiest ever pictured on a CJC. 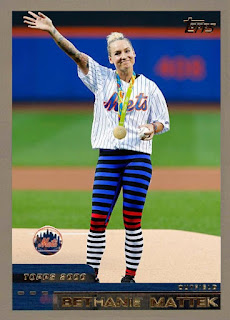