On the Beat With Val Malone

Yesterday, I interviewed Val Malone, the Queen of Wisconsin wrestling. A manager and wrestler, Val talked about all aspects of her career. That interview is at On the Beat With Val Malone.

Val's interest in wrestling started in her youth. With wrestler Dysfunction (Kurt Krueger) as a brother, it seemed natural for Val to enter the world of pro wrestling. Val talked about the advantages and challenges of having a pro wrestler as a brother.

Through hard work and determination, Val started carving her own place in wrestling. After 15 years of guiding many wrestlers to championship gold, Val is still going strong.

She recently added a title belt to her collection, when she beat client Rayvin Raddix for the 4th Wall Wrestling Women's Championship. Val discussed the situation, while also serving notice to any of her clients she is after gold one way or another. Val also addressed editing her Queen of Wisconsin Wrestling title to include Illinois, the midwest or even the country.

The next 4WW show is Friday, August 5 in Milwaukee. A women's title match hasn't been announced yet, but Val will be there with her shiny new belt. My money is on Val keeping that belt one way or another.

In addition to 4WW, Val also regularly appears fo AAW Pro and ICW. The next show for AAW Pro is Destination Chicago on Thursday, September 1 in Chicago, while ICW's next event is Insane 8 on Sunday, July 30 in Waukesha. What roles Val will have at those shows is undetermined, but she always makes her presence felt.

Until then, enjoy the interview and follow Val on social media. Check back here for my recurring coverage of Chicago area wrestling. Lastly, a big thank you to Val for her time, consideration and yeras of wrestling entertainment. 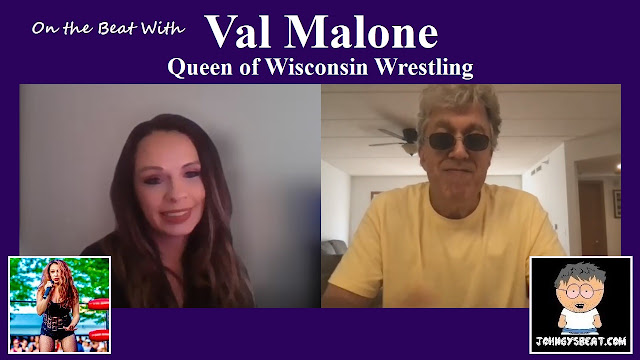