The Steiner Brothers and The Fed at Squared Circle Expo

One of the cool photo ops was the dual Steiner Brothers picture Tonya nd I took. Scotty and Rick Steiner were a dominant tag team, before they went on to mostly wrestle singles matches. Although big, Scotty pulled off great moves, while Rick was the powerhouse. Stars at the University of Michigan, they both had outstanding amateur backgrounds.

Then there is my buddy Tony Feddeler. On our way to the SCX, I told Tony he would get some people thinking he was a wrestler from that era. Tony is a big guy and definitely looks like he could have been a wrestler.

While it is not completely confirmed, we did see a couple people point to Tony and whisper, seemingly thinking he was a wrestler. We know the look. Tony received the look. I swear, he could have made some money if he set up his own table and promoted himself as an 80s masked wrestler or perhaps enhancement talent. Tony has the personality to make it work, too.

The Steiners and Tony could have been a great six-man tag team. I loved the old six-man tag matches and championships. While there still are six-man matches, six-man titles do not exist in the big companies anymore. Those titles were a good way to include solid wrestlers who weren't main event solo stars.

Tony and I will be back at SCX III, which was announced for April 7-8, 2023. If you see Tony, stop him for a selfie! For more info, go to SquaredCircleX.com. Check back here for my recurring coverage. 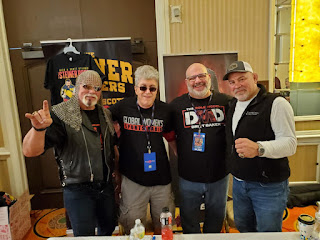 Scott Steiner, Tony Feddeler, Rick Steiner and me in Indianapolis, IN-April 2022.
Posted by Johngy at 6:00 AM