On the Beat With Grin of Rocket Pro Wrestling

I interviewed Grin, one of my long-time favorite wrestlers. More formally known as Grin N Barrett, he is a veteran of the Chicago area wrestling scene.

I last interviewed Grin about 10 years ago. I was surprised to learn I was his first interview after coming out of retirement back then.

It was long overdue to get an update interview with him. After stepping away from the ring a few years ago, Grin once again was pulled back into the squared circle. This time, Rocket Pro Wrestling lured him back. This was the perfect time to get that update.

The powers that be at RPW were wise to coax Grin back into active duty. Recognizing Grin was a major player at Pro Wrestling Blitz in Joliet, RPW management knew their fans in the same area would welcome him back and they have.

In our interview, Grin returns the love and appreciation for RPW and his fans. He does admit it is odd at times, since Grin is a bit of a sinister character. Like some wrestlers who are so good at being bad, they get cheered, Grin has heard the cheers for years and has had to adjust his character accordingly.

Grin also talked about his teenage daughter. Part of his reason for returning is for her to see him in action. He also discussed what she thinks of her dad the wrestler and if she has a future in the business.

Of course, we had to discuss his upcoming Heavyweight championship title defense against Christian Rose at Fall Brawl September 10. As I have covered in other interviews here, the Fabulous Idols are running the show, but Grin might have a few tricks up his sleeve, too. He likes the title belt and plans on keeping it.

I won't don facepaint, but I will be “On the Beat” at Fall Brawl and will recap it here. Check back here for all my coverage of Rocket Pro Wrestling. 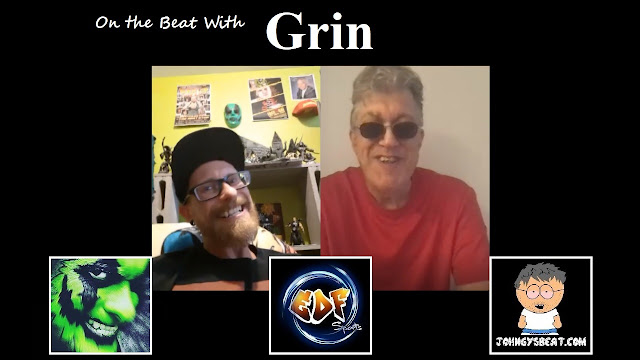