I was very involved in this Friend Encounter. At C2E2 2022, I enlisted the help of my friend Tony Feddeler on Sunday at C2E2. The Fed showed up wearing my shirt (not a requirement) and was a huge help all day.

On the way there, I told Tony my stories from the previous days at C2E2, including meeting Barry Gordon, who was incredibly nice.

Gordon was a supporting cast member on tv's Barney Miller and Fish, along with appearing in Roddy Piper's Body Slam and dozens of other shows and movies. Gordon also did voice work on The Teenage Mutant Ninja Turtles, which is why most people there wanted to meet him.

Tony and I are old school though or maybe we are just old. Either way, we liked him in his tv roles and told him so. Gordon seemed genuinely touched, although he did say several folks asked him about those roles. Unfortunately, Gordon did not have any 8x10s from those roles. I think he might start bringing them to future appearances though.

Gordon was such a nice guy. He talked about his theater work in Los Angeles and asked about us. I told him I really wanted to interview him and gave him my card. I haven't heard yet from him, but I am keeping hope alive I will some day. If Gordon should see this or if anyone has contact info for him, please let me know.

My next convention stop is New York Comic Con, produced by ReedPop, who produces C2E2. I am sure I will have great fun there, too.

Go to C2E2.com and NewYorkComicCon.com for info and updates on these great shows. Also, check here for my recurring coverage of both. 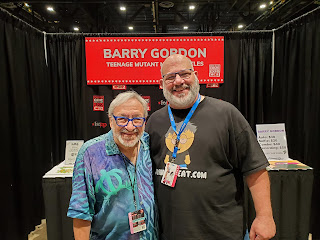