On the Beat With Timmy "Too Sweet" of Rocket Pro Wrestling

There are many parts of a professional wrestling show. While the wrestlers get most of the attention, and rightly so, there are many other folks who contribute to the show.

I wanted to interview Timmy because he is entertaining and a big part of the RPW production, but also to show you don't have to be an athletic in-ring performer to be a part of pro wrestling. Timmy is a great example of that. That interview is at On the Beat With Timmy "Too Sweet" of Rocket Pro Wrestling.

Timmy described how he went from being a fan to starting his ring announcing career. It wasn't a lifelong goal. He didn't start In his teens. Still, once given the opportunity, he dove in with passion and worked hard to hone his craft.

Of course, Timmy discussed the shows and crowds at RPW. Hype (and overhype) is natural in the world of pro wrestling, but as I witnessed first hand last weekend, the hype about the RPW crowd is real. The louder the crowd got, and it was rock concert level loud, the louder Timmy had to get to make his announcements.

After making the transition from fan to worker, Timmy talked about seeing wrestling from a new viewpoint. He also discussed the fun and surprise of signing autographs and meeting fans.

Timmy ended by putting over Darkness Falls, RPW's next show on October 1 in Joliet, Illinois. The show features “The Icon” Grin facing “All Day” Marshe Rockett in a casket match. This would be a main event level match anywhere. Grin is seasoned veteran who came out of a semi-retirement for RPW. Despite his devilish ways, he became quite a fan favorite. On the other hand, long time good guy Rockett seems to have had a change of heart.

This was an especially fun interview for me. I have known Timmy and his wife (RPW photog Missy) for a long time, from our mutual love of comic cons. It was great seeing them again last weekend.

I appreciate Timmy for his time and consideration. Check back here and TheEveryDayFan.com for my wrestling interviews and other wrestling coverage. 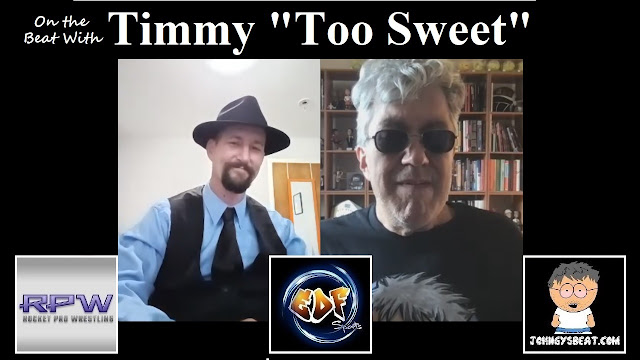