Cards That Never Were is a recurring series in which I create virtual trading cards for players missed in various sets. It is a concept I have borrowed from far too many to list, but I appreciate all of their efforts.

Many of my card creations and thousands from others can be found in the Custom Baseball Cards Facebook group. One of the best and most active creator is Lynn and I go to him when the card requires more skill than I have, which is the case with a couple today.

After starring at Clemson, QB Steve Fuller was selected by the Kansas City Chiefs in the first round (23rd overall) of the 1979 NFL Draft. Fuller played four seasons with the Ciefs. He was with the Los Angeles Rams in 1983, but did not get into any games. He joined the Chicago Bears in 1984 and played a big role in their magical 1985 season. Fuller retired after the 1986 season with the Bears. All told, Fuller started 42 games, throwing for 7,156 yards and 28 touchdowns, with 41 interceptions.

For his efforts, Topps gave Fuller cards in their sets from 1880-'82 and 1985. That left 1983,-84 and '86-'87. As I wrote, Lynn helped by creating the very challenging 1983 card. He also made the 1986 card. I could have made that one, but since he already did, there was no need for me to duplicate his effort. I then created his 1987 career capper. This leaves only 1984, but since no pictures of Fuller with the Rams can be found, that remains understandably undone. 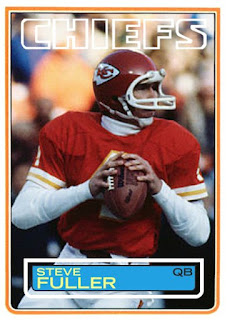 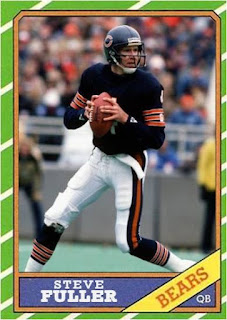 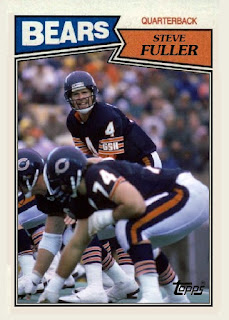