On the Beat With Jack McDowell

Earlier this week, I interviewed former Major League Baseball pitcher Jack McDowell. Recently jumping back into music, Black Jack talked about his latest endeavor, as well as a little baseball.

McDowell had an excellent MLB career. Selected by the Chicago White Sox in the first round (fifth overall) of the 1987 MLB draft, Black Jack went on to a 12-year career with the Sox, New York Yankees, Cleveland Indians and Anaheim Angels. Along the way, he won the Cy Young Award in1993, when he went 22-10, and was an All-Star three times.

Pretty open about his disdain for some of the changes in baseball, McDowell gave me his reasoning. As a youth coach, McDowell is passing down all he learned and is helping to grow the game for future generations.

Being a memorabilia collector, I had to talk to him about his recently released bobblehead. Licensed by McDowell, Autograph1 and the National Bobblehead Hall of Fame and Museum, it shows McDowell in mid pitch, with an actual BlackJack card combo behind him. This cool bobblehead sits on my book bobblehead shelf. McDowell reflected on seeing himself in bobblehead form, while telling a fun story involving his children and bobbleheads.

During his career, he dabbled in music, releasing several CDs. While his work with Stickfigure was a side project, it was one he took very seriously. McDowell’s musical journey really started during his time at Stanford. After signing with the Sox, he couldn’t play collegiate ball, so he turned to music.

Although I didn’t get to see Stickfigure play in person, I have several Stickfigure CDs. I never looked at McDowell as a player who put out music. He was (and is) a legit musician. Now, after a lengthy absence from the music scene, McDowell is back.

BlackJackian’s “Replant Our Lives” is a major labor of love for McDowell. It is also a solo effort on every level. McDowell wrote all the songs, played all the instruments, created the artwork, burned the CDs and is selling them through his Facebook page.

He stopped short of committing to producing more CDs, but I got the feeling music is so much a part of him it has to happen. I definitely think he’ll continue writing music, but I hope he shares it with fans through future CDs.

Thank you to McDowell for his time. Also, thanks for a lot of great memories for this Chicagoan. 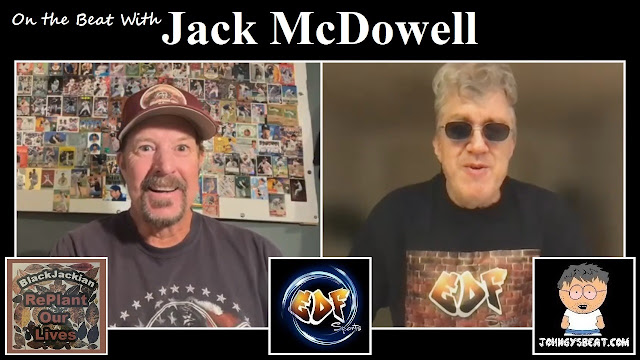