On the Beat With John Crowther

I have wanted to interview author John Crowther for a while. Now was the perfect time with his recent release of The Bushwhackers: Blood, Sweat & Cheers and his announcement of his next project with Ray “Glacier” Lloyd. That interview is at On the Beat With John Crowther.

Crowther starts our interview with a brief bit on his background, how a lawyer added “author” to his resume. It's an interesting and creative tale involving conventions.

Growing up in the Florida area, Crowther was a fan of (the now defunct) Florida Championship Wrestling. He talked a bit about FCW and the wrestlers, including a story involving Kevin Sullivan, one of my all-time favorites. In Chicago, I never got to see FCW, following it from afar through wrestling magazines.

His interest in wrestling wasn't limited to FCW though. Crowther watched it all. Little did he know at the time, he would eventually be writing about those larger-than-life characters he saw on television. His first foray was in comic book form, but he has added autobiographies to his repertoire.

From there, we segued into discussing his recently released bio of the Bushwhackers. To young fans, this team was a fun duo from the WWF of the 1980s. Older fans know them better as the New Zealand Kiwis or the Sheepherders, a successful, longtime team. The pair's talent went well beyond their comedy stint in the WWF, although, it brought them fame and lengthened their careers. Crowther speaks a bit on this, but covers it all in the book.

Earlier this week, Crowther announced his next book project will be with WCW's Glacier. Like the Bushwhackers, Glacier's talent and career goes well beyond his stint in the WCW. He hasn't started on the book yet, but Crowther will speak and possibly meet with Lloyd many times to get this book done.

Crowther talked about his writing procedure. He opts for actual conversations and meetings to get the feel, nuances and actual vernacular of the wrestlers. It's probably a bit more effort, but the results are a book with the real feel of the wrestlers.

Lastly, he gave a mini-scoop about another future project. He will do a cookbook featuring many wrestlers. There's no set start or finish date, but it will be worked into his schedule in the near future.

Some of Crowther's comics are still available through him via his social media platforms. You can also check Amazon for his books. Check back here and TheEveryDayFan.com for more from Crowther and other wrestling coverage. 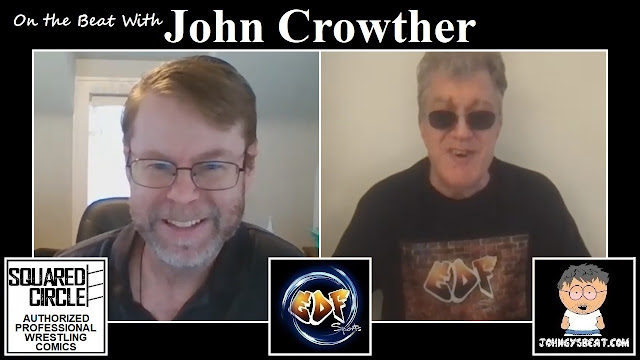