Crimson Vixen of the Chicago Knockouts Roller Derby league was the latest guest on The Johngy "OR ELSE" Podcast. My podcast partner Tommy Else and I got to talk derby with her as the CKO prepares for its season-ending championship bout Saturday, November 19. Not only a skater, Crimson Vixen is the league founder.

CKO is a Chicago area-based roller derby league. This version of roller derby combines the theatrics of old school televised roller derby, while having a legit set of rules and real competition. It really is the best of both worlds and it was set in motion by Crimson Vixen.

Falling in love with roller derby in the early 2000s and skating on other teams, she set out to create a league in her vision. Thus, CKO was born. This was not simple labor of love, nor hobby, though. Armed with her passion and bolstered with a keen business sense, Crimson Vixen built CKO into a thriving roller derby league.

Like many other businesses, the pandemic forced CKO on hiatus, but earlier this year the league came back strong. Now based in Homewood, about 30 minutes south of Chicago, CKO is packing the Homewood-Flossmor Auditorium with rabid derby fans.

Crimson Vixen discussed her start and the formation of the league. She explained developing the league, the differences between CKO and other leagues, her name and derby names in general and more. She talked about story-telling, building anticipation and excitement and drawing in the audience, within the confines of true competition.

Looking beyond this season, Crimson Vixen gave us a little info on events in 2023. She also invited us to derby lessons. Might Tommy and I don the skates and learn a little first hand? Stay tuned to see what develops.

We finished with talk of the championship bout this Saturday, November 19. The culmination of the great season will see the Comic Book Crushers facing the Horrific Hunters. This promises to be a smash-mouth, exciting finish to the season with one team hoisting the trophy at night's end.

We will be “On the Beat” to see the action unfold. I will also have more coverage later this week when I interview CKO broadcaster Steve Ahrendt to get his insight.

You can watch the podcast at The Johngy "OR ELSE" Podcast - Ep. 44: Crimson Vixen. You can also listen to it on Spotify. 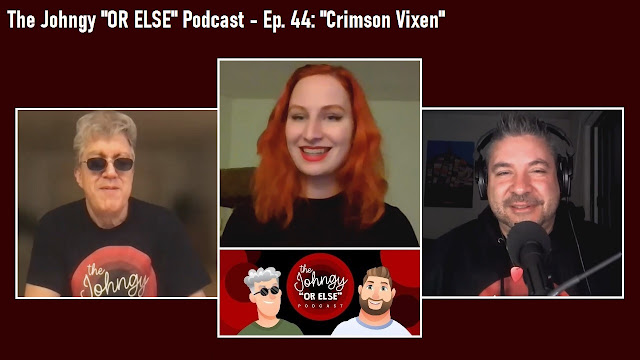 Email ThisBlogThis!Share to TwitterShare to FacebookShare to Pinterest
Labels: 2022, Chicago Knockouts, Every Day Fan Sports, Interviews, John Wroblewski, Johngy, The Johngy or Else Podcast, Tommy Else