On the Beat With Greg Evans

Yesterday, I wrote about receiving a signed Luann comic strip and a personal note from Greg Evans, the creator of Luann.  I decided to try to contact Evans and ask him a few questions.  Evans responded very quickly and positively.  My questions and his answers are below.

Q:How have you kept Luann fresh and relevant for so long?
Evans:The evolution of Luann has been unconscious - that is, I've been led by the characters steady development over the years. As they've grown more complex and "real" so has the strip. They've never been fixed in time; they live in today's world.

Q:How did it feel the first time you saw Luann in a bookstore and were asked for an autograph?
Evans:GREAT! Until I noticed that the store had 4 copies of the Luann book and 185 of Fox Trot. Being asked for an autograph is a genuine compliment to me. I've never considered it a nuisance or invasion - unless it's "Could you sign your name and draw all your characters on this stack of 3x5 cards?"

Q:Have you given thought to aging Luann into an adult?
Evans:If I keep aging Luann, she'll turn into Cathy. I'm not sure I need to go there. Again, the characters will tell me when they're ready to age.

Q:Have your children ever expressed concern that part of their lives would end up in a Luann strip?
Evans:No. In th early years, when my kids were teens, I was careful not to put anything in the strip that might embarrass them. For instance, when I did the story about Luann getting her first period, I did it well in advance of my own daughter's experience.

Q:What is your favorite location?
Evans:Home. I like to travel (well, actually, I hate to TRAVEL - I just like BEING somewhere. Give me that Star Trek Transporter, please) but I'm always eager to get home. I like the comfy rut.

Evans has been creating Luann strips for newspapers since March 17, 1985.  He has tackled socially relevant and important issues over the years, while always keeping the humor and warmth that Luann fans enjoy.  Luann has aged a bit since her debut and her world has expanded, but we can always count on the comic strip to brighten the day.  Evans has created Luann, her family and friends with
Evans has had more than 20 Luann books published, including his latest Luann 25 Years, which can (and should) be purchased from the Luann site.  If you order from his site, Evans will sign the book and the first 200 people will get a free Luann Musical cd (yes, there also was a Luann musical.  How cool is that?).
Thanks to Greg Evans for answering my questions and for so many years of enjoyment from Luann. 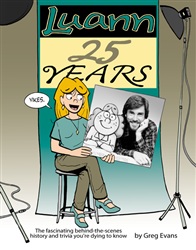