Freddy Krueger's very first murder victim in the Nightmare on Elm Street films was played by actress Amanda Wyss.  That wasn't her first role, nor was it her last.  It is hard to believe that Wyss has been active for about 30 years.  Honestly, I am not great about guessing ages, but at Days of the Dead, Wyss looked much younger than her reported age (look it up...I'm not telling).
Wyss proved herself to be quite the trooper when she appeared at the Days of the Dead convention despite having a severely injured shoulder.  Most celebs would have opted out, but Wyss was a gamer.  She eagerly posed for pictures, although did request no hugs or shoulder contact of any kind.  Fortunately, it was her right shoulder, which did not affect her autograph signing.
Wyss was in such a good mood, you would never know she was also in pain.  What a trooper.  It was a pleasure meeting her and I walked away even more impressed. 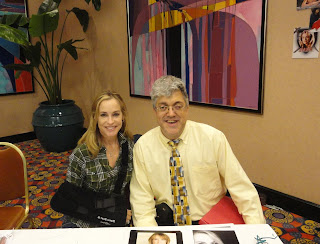 I remember being glad she was killed in Nightmare because of how she dumped Brad in Fast Times. :)

But seriously, she looks beautiful. I think she looks prettier now then she did then.

She looked great! Plus, it did not look as if she has been under the knife to look that good.