Bear Down Sunday #3-Bears Versus Rams

The Bears and the Rams are both 1-1.  This is a huge game for the Bears already despite being so early in the season.  The last game for the Bears featured a return to shakier offensive times.  I am hoping for a rebound this week, to the times of the mid-80's Bears.  Let's start with the offensive line.
Born in a suburb of Chicago, Kurt Becker played 8 of his 9 NFL seasons with the Chicago Bears.  He was a member of the 1985 Super Bowl champion Bears, starting 3 games at guard.
Becker was part of the great Bears offensive line of the 1980's.  Although he played one season with the Rams, he did come back to the Bears to play the final season of his career.
I would be remiss if I did not mention that he was a standout lineman at the University of Michigan.  The Gekas clan would never forgive that omission.
The Bears offensive lines of the last few years could use a standout guard (and a standout tackle, a standout center, another standout tackle and another standout guard).  Becker was excellent, yet only started regularly for 2 years of his career.  That is how good those lines were.  As the old joke goes, Becker would probably start on the current Bears offensive line...and he is 54 years old!
Hopefully, the image of Becker will inspire the Bears offensive line to play more reminiscent of the old Bears offensive lines. 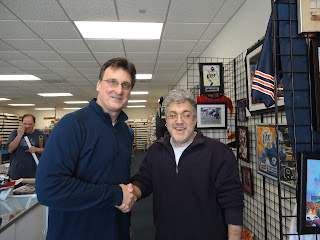