A couple weeks ago, I ran "Celebrity Jersey Cards #113 Frankie Avalon & Chuck Berry."  About a week later, I received an email from a fellow blogger named Peter, who is the creative force behind "Go Head On! The ART and Rock & Roll of Chuck Berry."  Peter was inquiring about my Chuck Berry card creation.
Obviously, Peter is a huge fan of Chuck Berry.  He is also extremely knowledgeable and interesting, as you will see if you check out his site.
Peter asked me a few questions and also asked if he could use the card on his site.  How cool!  It is always very nice when someone recognizes any of your work.  I was honored that he liked my card creation and my site enough to write about it on his.  His post on m Johngy's Beat can be found here.
He has a ton of cool stuff on his site.  Because I just became aware of it, I have a ton of his older posts to catch up on, but I am looking forward to reading them.  So far, it has been fascinating.
Below are a few questions I asked Peter.

Q-Have you ever met Chuck Berry? Do you have any pictures with him?

PO-When I was 15, I found him sitting next to the stage at a show at Lake Tahoe and had the courage to shake his hand and yell "You're my Idol!" as loud as I could over sound of the opening act. After that it was tiny bits of contact. I passed him a note at a show. After another show he signed a photograph for me but didn't speak. Then, when I was 54 years old I got lucky. A couple of his band members, who knew my blog and must have felt sorry, took me backstage to his dressing room. It was at a club called The Pageant in St. Louis. Chuck was about to turn 84. He had just done a wonderful show where everything clicked. I found him sitting on a couch. He jumped from the couch to shake my hand and let me spill a lifetime of adoration upon him. It was pretty wonderful. Since it was his birthday I gave him a pencil sketch that I drew of him when I was a child. The sketch was of him as a child, looking wise beyond his years. I remember that he told me a story about when he was 14, and I was so excited I forgot the story immediately. I just remember him pointing to the floor of the dressing room and saying "right beneath this very room where we are standing!"

A couple of years later it happened again. I remembered the kid story, so I brought a photograph of him when he was about 12. He was using a telescope. Another Chuck Berry fan and I figured out that in the picture he was observing the sun. We wondered if there was an eclipse in St. Louis around that time. Turns out there was. So we realized he was a serious little astronomer. The day of the show I was backstage when Chuck Berry was leaving. His son called to him and said "Dad, there's a friend from Seattle here and he's got something for you." Chuck stopped and gave me a big handshake. That night he was dressed all in black with aviator shades and a leather jacket. He looked every bit the father of rock and roll. But when he saw the picture he could only shake his head and say "Ooooh wee! Where'd you get this?" Then he told me to follow because he was going to show it to friends. His friends all joked that Chuck was probably using the telescope to look at a girl. I, being a geek, asked if he remembered an eclipse. Chuck just stared and the picture and smiled. "Look at those shoes!" he said, pointing to the long, two toned brogans.

I've written about all of this on the blog, and you can find the pictures and sketches there, too. But I never asked for a picture with him. I'm not very photogenic, and I'd hate to have an awful picture of myself with my hero!

Q-Have you ever heard from Chuck Berry about your site?

PO-I haven't, and don't expect to, but I've had kind words from his son, Charles, and from a couple of musicians who know him well. It means a lot to me when someone who knows Chuck Berry thinks I've gotten it right. I'll admit, I'd love to think that he's taken a look. But I bet he's probably tired of people writing about him. He gives us all the music, and that's enough.

PO-That's tough. I like a LOT of them. But some of my favorites are less well known. There's a song called "Tulane" about a young woman who jumps the counter and runs from the cops. There's another, a blues, called "Have Mercy Judge," about her boyfriend Johnny who stumbles and goes to jail. There's an instrumental called "Deep Feeling," and a swampy song called "Oh, Louisiana." And, of course, I love all the rest of them. "Too Much Monkey Business," "Nadine," "The Promised Land." The only one I never want to hear again is his ding-a-ling. But that was his biggest.

If people are interested I wrote a book about him and how he weirdly affected and affects my life. It ain't gonna be in stores, but you can read it a chapter at a time on my site. I've been publishing about one a week, and collecting them there.

Peter's site is a real treat for Chuck Berry fans, music fans or really just anyone looking for interesting things to read.  Go to GoHeadOn.blogspot.com to see for yourself! 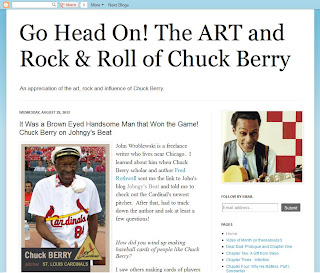