At the last Wizard World, Matt Parker and I were excited about meeting wrestling legend Booker T.  Booker T has won many Heavyweight and tag team belts.  He was at Wizard World to meet fans and to promote his book, Booker T: From Prison to Promise.  We later found out he was also there for one other reason.
We knew Resistance Pro Wrestling had a booth at the convention.  JohngysBeat.com did several interviews with the R Pro wrestling talent.  However, we had no idea that Eric St. Vaughn would be appearing at the R Pro booth.
ESV is one of the talented stars of R Pro.  Obviously Booker T knows his wrestling and couldn't wait to get his picture taken with the future legend ESV.  Now can you dig that, sucka?
We originally wanted to get an interview with Booker T, but that all changed when we saw ESV was there.  We shifted all of our energy to secure an interview with ESV.  ESV must have been in a good mood, because he gave us a few moments of his time in the interview which can be found here.
After you watch the interview, be sure to check out ResistancePro.com and the Eric St. Vaughn Facebook page. 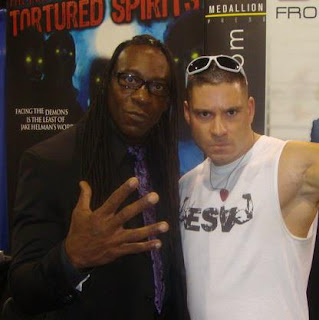 Booker T and Eric St. Vaughn at Wizard World in Rosemonty, IL-August 2012.
Posted by Johngy at 5:55 AM