I met Trevor Blanchard when I started covering POWW Wrestling.  Blanchard is a wrestling veteran of over 20 years.  He has wrestled everyone and everywhere.
Lately he has been tag teaming with Sexy KC.  They are definitely a heel tag team, but their ability cannot be denied.  They get a great crowd reaction and perform well in the ring.
I am sure Blanchard has some great pictures with many wrestling legends, but it is hockey season and there is no Blackhawks hockey.  I needed a little Blackhawks buzz.  I recently came across this picture of Blanchard that he calls "three Champions."  I cannot deny that either.  Blanchard is a champ in and out of the ring.
If you are missing the Blackhawks like I am, why not try something new, like POWW Wrestling.  They have several events in the near future, Wrestle Rage on November 10 being  a super show!  Go to POWWEntertainment.com to learn about Trevor Blanchard and check out the rest of POWW.  Then, attend a POWW event and tell Blanchard Johngy sent you! 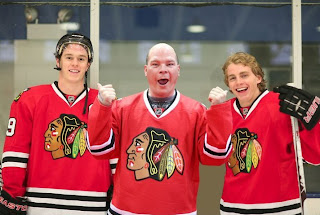 Jonathan Toews, Trevor Blanchard and Patrick Kane in Chicago, IL-February 2011.
Posted by Johngy at 5:55 AM

Thumbs up best jersey in sports - where is hockey