Old and New with Rick Stelmaszek

I have written many times about Rick Stelmaszek.  You can do a search on here and find a bunch of posts.  It has been such a blast following his career from local star to major league player (including a stint with the local Chicago Cubs) to longtime major league coach with the Twins.
A few weeks ago, I joined my family for an afternoon at US Cellular Field to watch the Sox and the Twins.  Prior to the game, my nephew Matt, my dad and I hung out down the right field line and waited for Rick to make his way to the bullpen.
Rick came over and talked to us for several minutes.  The Twins were having an unusually bad season, but Rick was positive about the future.  They have some young players who look good.
It was really cool to hang with Rick and my dad, even if only for a few minutes.  My dad got me my first autographed photo and ball.  Yep, you guessed it.  Both were of Rick.  Now, some 40 years later, all things converged to bring us together.  This was awesome.  I love the picture below.  It represents so much to me in my baseball fandom. 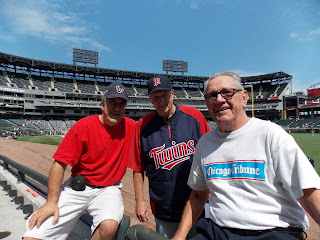