Bear Down Sunday (On Monday) Bears vs. 49ers

The Bears are now 7-2 after losing a tough game to the Houston Texans.  It doesn't get any easier today, as the Bears face the San Francisco 49ers, who are 6-2-1 and coached by former Bears quarterback Jim Harbaugh.
Harbaugh had a lengthy and successful NFL career, although really shining after leaving the Bears.  Harbaugh is a hard-nosed kind of guy and coach.  This game should be a slobberknocker.
This last summer, at Arlington Park Racetrack, we ran into Staley, the Chicago Bears mascot.  I am not sure what Matt did to incur this wrath.  Maybe Matt was windsocking that day and Staley tried persuading him to back the Bears.
The lesson here isn't what Matt said or did.  What we must learn from this is toughness.  The Bears need only look at the picture below.  If Staley could headlock the 6'3" Big Money (and I think he might have cried a bit, too), surely the Bears can handle the 49'ers. 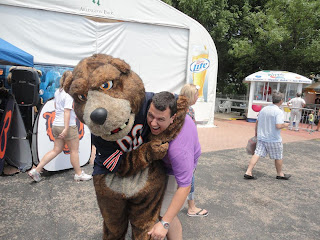 Matt Parker and Staley in Arlington Heights, IL-June 2012.
Posted by Johngy at 6:00 AM

Go Bears! Hopefully they can win without Jay Cutler .. we will see.

You should have skipped Bear Down Sunday (On Monday) this week!!