It has been a while since my nephew Matt Parker has been featured here.  I know we have seen him on JohngysBeat.com in his role as Contributor Extraordinaire, but today he is appearing as a commoner meeting a celebrity.
Matt is usually an easy going guy.  I have never seen him irate nor have I ever seen him make anyone irate.  So exactly what did he do to anger the wookie known as Chewbacca?
My take is that Chewie saw a JohngysBeat.com shirt and naturally wanted one.  Matt obviously did not have an extra one on him (nor do we even have 4XLT shirts).  Chewie does not take disappointment well.
Of course, as Matt's uncle, I diffused the situation...eventually, but not before snapping this picture for historical purposes. 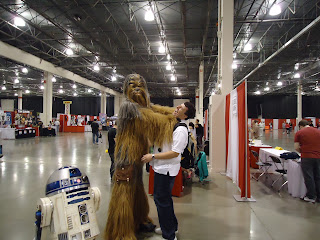 Matt's the one on the right?