Christopher Hubble is the owner of Triple Threat Sports.  TTS is a great place to get jerseys or custom-printed shirts.  I have ordered shirts from them several times and have always been completely satisfied.  Everyone there is friendly, helpful and quick with an answer.
I have also attended a few player appearances at TTS.  Matt and I have seen Calvin Thomas, Tommy Zbikowski and others there.  The prices are fair and the events are always well-organized.
That brings us to today's featured encounter.  Hubble had Kevyn Adams in the store a few years back.  Adams played in 540 games in the NHL for several teams, including the 2007-08 Chicago Blackhawks.  Last season, he was an assistant coach with the Buffalo Sabres.
Wow I miss hockey!!
Christopher has agreed to share other pictures and I will be putting them here periodically.  I appreciate his willingness to share and his store's excellent work on those great JohngysBeat.com tshirts! 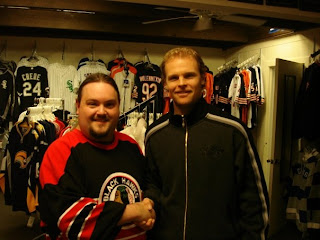 Christopher Hubble and Kevyn Adams in Mokena, IL-December 2008.
Posted by Johngy at 6:00 AM