Bear Down Sunday #9 Bears vs. Texans

The Bears face the Houston Texans today.  Both teams are 7-1 and this should be a battle.
Speaking of battles, this game could rip apart my family.  Heck, this game could rip apart Scott all by himself.  Who does Scott want to win this battle of his favorites?  It would be like me deciding between Andrea Evans and Lauren Holly.  Yet, Scott must make that choice.
Then there are Matt and I.  Which way do we go?
After those questions are settled, we must look at who is on whose side.  It could be all three of us are on the same side (doubtful and a rarity).  Will father oppose son?  If so, where does Jean (Scott's wife and Matt's mother) put her loyalties?
For the record, I am predicting Scott will back the Texans.  Matt (in full wind sock mode) will flip-flop until the very end when he jumps on the winning bandwagon. 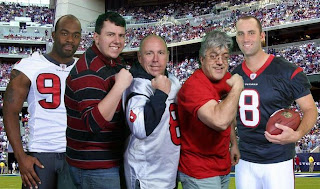 Mario Williams, Matt Parker, Scott Parker, me and Matt Schaub in Houston, TX-December 2010.
Posted by Johngy at 6:00 AM

Jean is going Bears all the way ...