This is a weekly series featuring friends who have met celebrities.  Have you ever met a celeb (of any sort)?  Join the fun by sending the picture over to me.

I first came across Ira Knobler while doing research for some wrestling story years ago.  While I have never met the East Coaster, I always enjoy the many pictures Ira posts from his encounters with various wrestlers.
Recently, Ira went to another signing and posted a picture with AJ Lee of the WWE.  AJ (April Jeanette Mendez) has been involved in wrestling since 2007.  She has been with the WWE since 2009, but recently really caught the attention of the fans with her quirky character.  Currently, she is the General Manager of Monday Night Raw, but she is certain to get back in the ring at some point.
AJ's character is refreshing and said to be an extension of her.  The best wrestling personas are usually based on the real personality of the wrestler.
Ira enjoyed his experience meeting AJ and I enjoyed running it here.  I have not met AJ, but when I do, I will report it here, too.
Ira did ask me to mention MarkedOut.com, a site about meeting celebrities.  He is a member of their message board.  I am a big fan of MarkedOut.com and have contributed a few pictures to the site.  Take Ira's advice (and mine, too).  Check out MarkedOut.com. 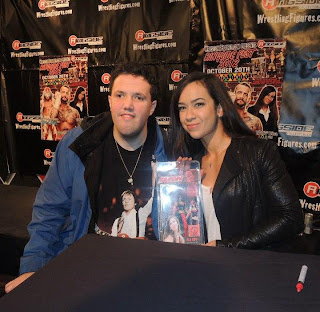