Bear Down Sunday #8 Bears vs. Titans

Today, the 6-1 Bears face the 3-5 Tennessee Titans.  It should be an easy win for the Bears, but last week should have, too.  I am featuring a name which has connections to both teams...Payton.
When the name "Payton" comes up, especially when discussing football, you normally think of Walter and the Bears.  Walter is one of the greatest of all time.  He was the Chicago Bears for many years during my youth.
I have so many memories of watching Bears' games with my dad.  Despite the Bears being so bad, Payton was always a highlight just by himself.  Eventually, Payton retired and unfortunately died so young.
Walter's son Jarrett Payton had an excellent college career and later played in the Canadian Football League and in the NFL with the Titans.  Jarrett did not have the football success that Walter did, but he is a very successful man in many other ways.  He is a businessman, a speaker and an entertainer.
Perhaps more important is the work he does for charity and the community.  Jarrett is making a difference.
Jarrett was at Arlington Park earlier this year when my family happened to be there for a day of fun.  We ran into him on the walkway and I asked for a photo.  I really wanted my dad to be in it, too.  My dad was hesitant to take Jarrett's time and to pose in "my" photo, but Jarrett encouraged him and dad joined in.  Jarrett was pressed for time, but he could not have been any nicer or more patient.
This is another of those priceless pictures for me.  It represents many childhood memories of watching the Bears with my dad.  I think Walter would like it, too.
To learn more about the work Jarrett does, check out JarrettPayton.com. 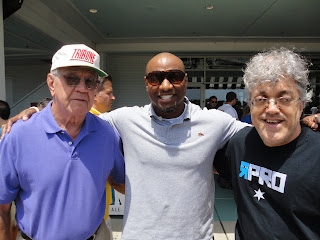 Frank Wroblewski, Jarrett Payton and me in Arlington Heights, IL-August 2012.
Posted by Johngy at 6:00 AM