Next Friday, November 30, I will be attending an anniversary party. This is no average anniversary party though. It is Resistance Pro Wrestling's one year anniversary and I am sure it will be a big celebration! I first learned of Resistance Pro at Wizard World 2011. Harry Smith, a third generation wrestler and part of the legendary Hart family, was manning their booth. Smith would eventually become R Pro's first Heavyweight champ.
I attended their first show a few months later at Excalibur. One show and I was hooked. I was so impressed with the production quality, the excellent matches and the fan-friendliness of the Baron family (the folks behind R Pro). Over the next year, I attended most of their shows and got to know everyone, including the Baron family, the wrestlers and the extended R Pro family of staffers. I interviewed many of the wrestlers, too. My nephew Matt and I even became part of their street team and helped with the poster distribution.
The Baron family aren’t just owners. They are now my friends. So, too, are women’s champ Melanie Cruise, Eric St. Vaughn, Nikki St. John and so many more. If it sounds like I have had a blast, it is because I have. I am not alone either. Matt and my friend Scott Beatty are also hooked, along with a ton of other fans.
That is a direct result of the passion that the Baron family has for R Pro and the passion they pass on to everyone involved.
Where else can you find the wrestlers posing for pictures and signing autographs before and after every show? Where else can you get to know the owners and the wrestling talent? Who else has a musical director in Sheri Shaw (along with Brian Judy, her sstaria partner)?
Where else will you see legendary wrestlers actually wrestling, like Vader, XPac and John Morrision, who with “The Ego” Robert Anthony, gave us a “Match of the Year” performance. Anthony would later win the Heavyweight title, which he still holds.
This all brings us to Friday, November 30 at the Teamster Auditorium, where R Pro will celebrate their one year anniversary at an event called "Sad Wings of Destiny."  Jake “the Snake” Roberts and Amazing Kong will be there, as well as Billy Corgan, R Pro's Creative Director and lead man of the Smashing Pumpkins.  I am sure R Pro will provide a few more surprises next Friday, too.
Several hundred fans will pack the place and be part of the anniversary event. Notice I wrote “be part of”, because at R Pro, the fans matter. Everyone truly wants to put on a great show for the fans! R Pro cares. What a unique concept for any business! Then again, the Baron family is unique!
So to Resistance Pro Wrestling and all involved, I say Happy Anniversary."  To all fans or potential fans, I say come out and enjoy the night. This is a celebration after all! 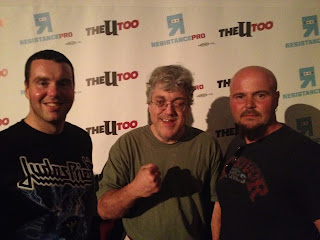 Gabe Baron, me and Jacques Baron in Merrionette Park, IL-Summer 2012.
Posted by Johngy at 6:00 AM