We have featured many great celebrities from the Motor City Comic Con over the years.  We have also featured many of the attendees in full costume.
People often ask me why I bother with these costumed attendees.  The answer is simple.  It's about fun.
These people have such a great time dressing like a certain superhero or character.  Some really get into it big time.  Many are just as big of an attraction as some of the stars.  Many spend a good part of their day there posing with other fans.
Anyone in Aquaman attire is a must-get picture for me, but I also stray to other characters, too.  Last year we saw one of the best Wonder Woman characters.  She had a great look.  She went with the realistic look, eschewing any over-the-top possibilities as I have seen others use.  Her outfit was appropriate for all ages.  I'm not a prude, but I prefer this to the sleazy look-at-me costumes I have seen some women (and worse...some men) attendees wear.
I will be looking out for more costumed greatness at this year's event.  Wouldn't it be cool if someone came as Johngy?  Okay, maybe more scary than cool... 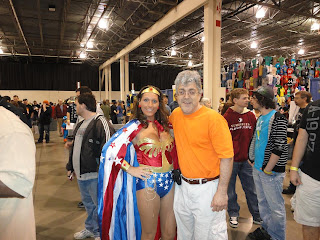