This is a regular series which attempts to combine my life long passion for trading cards with my interest in celebrities.  As we head into the final week of the season, my football predictions are on the decline, but the Seahawks are on the rise.  They have been the hottest team over the last few weeks.

The Seattle Seahawks have a pre-game ritual where a celebrity dons the #12 jersey and raises the #12 flag in honor of the Seattle fans (aka the 12th man).  I believe there has been only one member of the Seahawks to actually wear #12 and that is former quarterback Sam Adkins.  Adkins was with the Seahawks from 1977 (their second year) through 1981.  Unfortunately, he was stuck behind Jim Zorn and Steve Myer and appeared in only 11 games, throwing 2 touchdown passes.  Adkins never had a regular issued football card, so his Celebrity Jersey Card could also be a Card That Never Was. 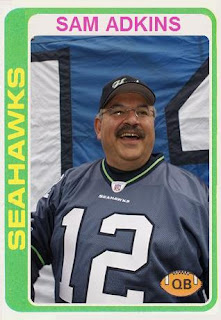 Kasey Keller grew up about an hour away from Seattle, but it took the pro soccer player over 20 seasons to finally play near his hometown.  The goalkeeper is has been the U.S. Soccer Athlete of the Year three times.  He is a great soccer player, but I am not sure where he would fit with the Seahawks.  Kicker is the easiest choice and thus it is listed on his Celebrity Jersey Card. 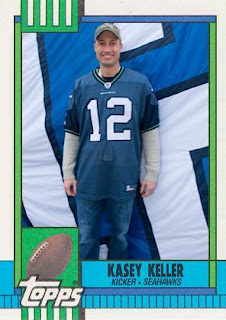