Bear Down Sunday #16 Bears vs. Lions

The Bears are facing the Detroit Lions today, in a game they must win.  Does it really matter though?  The picture below shows what matters.
While at Arlington Race Track last summer, Matt and I ran into the Lombardi trophy (aka the Super Bowl trophy).  For those who don't know, it was from January 26, 1986, which happened to be my 21st birthday.  That made for a great gift, but I digress.
As I wrote, all that matter is that trophy in the picture.  If the Bears eek into the playoffs this year, does it matter?  All that we will hear is how close the Bears are, when they are not.
In a year when teams were up and down, the Bears blew a big opportunity to make the season matter.  Perhaps if the Bears had an offensive line that could block.  Perhaps if the Bears had not turned the greatest kick returner into a below-average receiver.  Perhaps if the Bears had not wasted time with Mike Martz and lost Greg Olsen in the process.
The Lombardi trophy.  That is all that matters.  Not just beating the Packers.  Not just winning the division.  Not just scraping into the playoffs.
Why can't the powers that be go for the gold?  I mean make a real effort to win it all?  Instead, they seem to make a half-hearted effort to be competitive and with some luck they just might contend for the Super Bowl
They have the best quarterback they have had in my life.  Perfect or not, Cutler is the best we have seen.  Give him a team, a full team and go for the Lombardi trophy.
I think the Bears will win today and I think they will make the playoffs.  Then I see Green Bay or someone else smashing them out of their misery and putting the fans into their misery.  Stop the insanity.  Stop the cycle.
The Lombardi trophy is all that matters! 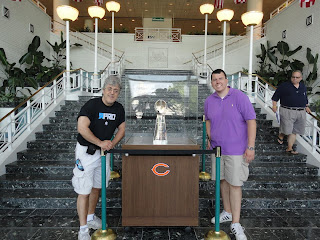 Matt Parker and me in Arlington Heights, IL-Summer 2012.
Posted by Johngy at 6:00 AM