I have written many times about Resistance Pro Wrestling.  It has been a real pleasure covering R Pro over the last year or so.  It has been even better getting to know the people behind R Pro.
Jacques Baron is one of the Baron brothers (aka the owners of R Pro).  Jacques was the first person I connected with in attempting to start covering R Pro.  I met him at the first show.  I also met his wife Haley.
Right from the beginning, they treated me like a part of the R Pro extended family.  Not only was the Baron family hands-on with R Pro, they are very fan-friendly and interactive.
Over the last year, I have been to most of the R Pro shows and a few after-parties and other R Pro events.  The Baron family has never been too busy to stop and talk for a minute.  They really make everyone feel like a valued customer.  I really think if they could, they would invite everyone over for dinner.
R Pro just celebrated its one year anniversary.  There was such a buzz in the air and everyone looked so happy and so proud.  I was excited for everyone at R Pro, but especially the Barons family.  While it is true that a company succeeds together, a successful company needs good people at the top.  R Pro is successful and they have great people at the top.
It has been a pleasure getting to know Jacques and Haley.  I am proud to consider them friends.  I lok forward to a great second year.
Below is a picture of Jacques and Haley with Nikki Sixx.  Jacques called it a "mark out" moment.  I can understand that feeling.  I have had many "mark out" moments at R Pro.
Thank you to Jacques, Haley and the rest of the R Pro for making me feel like part of it all.  Happy holidays to you all and I wish you the best in 2012.  I'll be there as the ride continues! 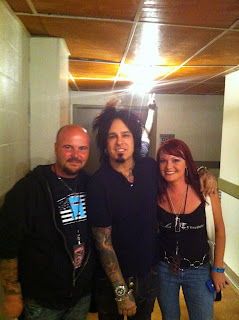