Scott Beatty and Eric St. Vaughn are two of my friends, although both might deny it.  Scott has been my heel counterpart on the JohngysBeat.com wrestling coverage.  Eric is one of the young superstars on the rise at Resistance Pro Wrestling.
ESV spent most of 2012 silently accompanying D'Arcy Dixon to the ring.  Late in the year, he became an ally of Ashton Vuitton.  The new year looks like it will be an exciting year for ESV.  It looks like it will be his breakthrough year.
Despite his disdain for the fans, ESV gets respect from them.  Once he steps in the ring and starts wrestling, I think the support of the fans will just get stronger.  In fact, I believe that ESV will become a fan favorite (or face) later in the year (or maybe in 2014).
ESV has the look, personality and charisma to become a star.  He is one of the up-and-comers who I will be following.
On the other hand, nobody is cheering for Scott, although he likes it that way.  A self-proclaimed heel, Scott can out-talk the best of them (or is that the worst of them?).  In his day job, he is the mild-mannered big kahuna at AU Sports, your best source of sports collectibles anywhere.
Together, these two could be an unstoppable force.  Might I suggest "Larger Than Life" as their team name? It seems fitting for either separately or as a duo.
These two larger than life characters will be at Stay Hungry, Resistance Pro Wrestling's next event on January 18 at 115 Bourbon Street in Merrionette Park, (IL).  For more information on ESV, you can follow him on twitter at @EricStVaughn or check out the ESV Facebook page.  You can also go to ResistancePro.com. 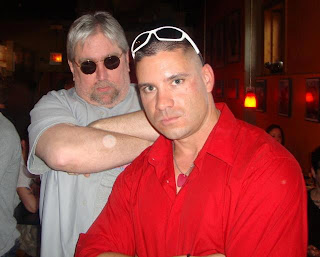