This is a regular series which attempts to combine my lifelong passion for sports cards with my interest in celebrities.  The Chicago Bears are not in the playoffs.  Still, it could be worse.  New York has two teams not in the playoffs!

A native New Yorker, Alec Baldwin was born in Amityville.  His career has bounced up and down (as has his personal life).    (I will resist an Amityville horror joke about his both.)  Baldwin proudly wore a Jets jersey (classic #12 Joe Namath) for an appearance on the Late Show where he threw passes outside somewhere near the studio.  I like a Celebrity Jersey Card with a football actually in the shot! 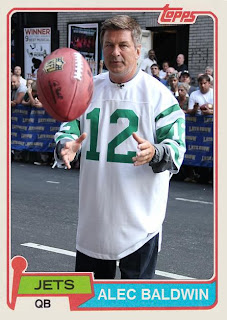 Another native New Yorker, Reba Sky was born in Flushing.  She is credited as a model, photographer, dancer, interviewer, media personality and pro wrestler.  Not listed professionally though is her true passion, the New York Giants (no, I was not going to say Matt Hardy, although he is her significant other at this writing).  Sky is a huge fan of the Giants and can be seen at many games.  Everyone knows I am a Manning fan, but I must say Ms. Sky looks better in the jersey than Eli does.  Is this the first Celebrity Jersey Card with a hard hat? 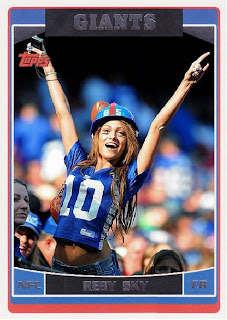