On the Beat at Pro Wrestling Blitz

Last week, I returned to Joliet and Pro Wrestling Blitz for their "King of Joliet" event.  I really enjoy Blitz's product, but scheduling conflicts prevented me from getting there sooner.
This night seemed electric right from the start.  The crowd was already buzzing, when Mr. Ricolo (Blitz's ring announcer) came out and got them even more wound up.
The card itself was excellent.  There as the 8 man tournament to crown the new King.  Mr. 450 won the tourney by winning his three matches with a different finisher each time.  For the final, he defeated reigning King Zach Thompson via submission.  How unique, cool and old school is that?
One of my favorites, Grin, teamed with Machine in a three tag team bout.  Grin and Machine have a great twisted gimmick and they play it well.  I am not certain they will be able to remain heels for long with the crowd response they got.
Blitz owner Tony Scarpone announced Chazz Moretti as the new Blitz Commissioner.  Moretti defeated Billy Whack through a fan vote (53% to 47%).  This is the first time I have seen Moretti in the good guy role.  He was working his usual magic and the fans are eating up the new Moretti.
In the main event, my guy Ruff Crossing defeated Ryan Slade after chasing him and the title for several months.  As a confirmed Ruffian, I could not have been happier to see Ruff with the gold.
After the win, Ruff celebrated with friends, including wrestlers from elsewhere.  He also made a point to come over to Scott and me.  How good is Ruff?  Scott actually dropped his heel persona for a minute to cheer for the good cowboy!  We even got a quick interview with the new champ.
This was a fantastic night of wrestling.  The matches were exciting and well-paced.  The card flowed well.  I am a big fan of old school wrestling and this was a great example of old school meets new school.  The production quality at Blitz is always top notch.  DJ Bob did an outstanding job with the music and video packages.
I applaud Scarpone and his entire Blitz roster for doing a great job.  Congratulations to Ruff for his title win.  Congrats to the new King, Mr. 450.  This was simply a very entertaining way to end 2012 and I look forward to coming back to Blitz much sooner next time!
For more info on Blitz, head to PWBlitz.com or check out the Pro Wrestling Blitz Facebook page. 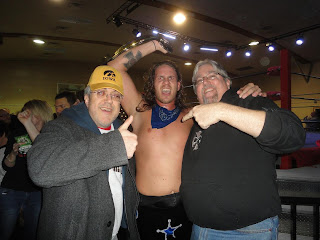 Ruff Crossing, Scott Beatty and me in Joliet, IL-December 2012.
Posted by Johngy at 6:00 AM