I thought Child's Play was a great horror movie.  I loved the Chucky character.  I had the pleasure of meeting Chucky (Brad Dourif) several years ago.  Young Andy Barclay wasn't a big fan of the Chucky (because Chucky tried to kill him).
At the recent Days of the Dead convention, I had the pleasure of meeting Alex Vincent who played Andy.  Andy had an interesting group of fans waiting to meet him.  There were a lot of young females and there were a lot of older male horror fans like me.  To his credit, Alex spent quality time with everyone.  He seemed excited to be at the convention.  In fact, he mentioned wanting to appear in Chicago.
It's hard to believe Child's Play came out 23 years ago.  It's also hard to believe that young Andy is now in his late 20's.  It was fun meeting Alex, but I feel a bit older now! 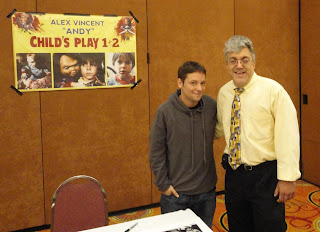