I had a major crush on Lauren Holly during her time on All My Children in the late 80's.  Okay, I have had a major crush on Lauren Holly since her time on All My Children in the late 80's.  She would probably make my Mount Rushmore of famous crushes.
At Wizard World, I was fortunate enough to be confirmed for a short interview with Lauren.  As usually happens at these conventions, Lauren was very busy and the interview got delayed.  Then it got delayed again.  I was determined to get it (and Contributor Extraordinaire Matt Parker was determined to get it for me).
At one point, Lauren said to come back when her line died down.  Matt and I camped out about 20 feet from her booth (not too close, but close enough to seize the right moment).
After about 10 minutes, there was only one person left in line and no stragglers headed in Lauren's direction. Matt and I made our move, only to have Luke Perry beat us to her.
Darn you Perry!
Perry had the booth next to hers and apparently had nobody at his booth, so he took the opportunity (my opportunity) to scootch over and start chatting with the lovely Lauren.
Darn you Perry!
After a few minutes (during which I was tempted to pay someone to go to Perry's booth to get him away), Perry finally returned to his booth and my moment arrived.  Lauren was very pleasant and apologized for the continual delays.  In turn, I apologized for my potential paparazzi-like behavior.  I simply stated that I was a huge fan and did not want to let this great opportunity go.
As promised, I kept the interview short.  All the while, I kept thinking "wow, I am interviewing Lauren Holly."  Yes, it really does happen like that.
I wrapped up in about 3 minutes, just as her line had started to build again.  I thanked her again, thanked Matt again and walked away on air.
Then I walked over to Perry and hit him.  No, actually Perry was very nice when I met him and he had no idea I was waiting to interview Lauren.  It all ended well, although if he cost me the interview, I might have hit him. 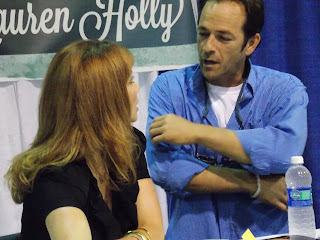 Lauren Holly and Luke Perry in Rosemont, IL-August 2012.
Posted by Johngy at 6:00 AM

Congratulations for choosing the higher route. I would have chosen to make history!

Hmmm I think I know you. Did you once almost drop the gloves with a former playmate at a different convention? hahaha