Days of the Dead is Going to Atlanta...Without Me

Days of the Dead in Atlanta is just two weeks away and I am really bummed that I will not be there.  I have been at both Days conventions in Indianapolis and the one in Chicago.  It is a great horror convention, full of interesting and fan-friendly celebrities.
Promoter Adolfo Dorta is dedicated to making Days the best con around and he is accomplishing that goal.  You can always find him at the conventions (although he is usually a blur) meeting fans and attending to any situation which arises.
At the Chicago event in 2012, he brought in Roddy Piper and Mick Foley.  Piper fits the genre because of They Live.  You could also connect Foley with horror because of his books.  Adolfo addressed his reasons slightly differently, by saying that both men are popular and horror fans are often wrestling fans.  Basically, horror connection or not, he was doing what was best for Days of the Dead and I cannot agree more.  In fact, he also talked about incorporating more wrestling in 2013.
That brings me back to the upcoming Days.  Longtime JohngysBeat.com favorite Diamond Dallas Page will be there.  Wrestling legend Jake "the Snake" Roberts will be there.  Mickie James (my favorite current female wrestler) will be there.  That is an excellent three pack of wrestlers.
I won't be there.  I have to much work right now to get away, even for the weekend, although I would love to go to Atlanta.  I will be going to the Days in Indianapolis in July, but that is a way off.
For the next two weeks, I will be wishing I was Atlanta-bound.  Then on February 1-3, I will really be agitated.
Just because I cannot go, doesn't mean I don't encourage everyone else to go.  Maybe I can live vicariously through you, although that will be small consolation when I see you hanging with DDP, Jake and Mickie.
Yes, Adolfo makes Days great, maybe a little too great.  I just hate missing one!
If you would like more info on this awesome con, go to DaysoftheDead.net. 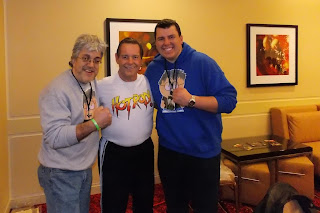 Me, Roddy Piper and Matt Parker in Schaumburg, IL-November 2012.
Posted by Johngy at 6:00 AM